In this blog, we give our Rivals/Nemesis review of the 3rd Gnarlwood warband and Rivals deck: Grinkrak's Looncourt and Fearsome Fortress: both the Warband and deck are available here (jumps to underworldsdb.com) https://www.underworldsdb.com/rivals.php.

Grinkrak's Looncourt is a 7-fighter warband featuring Grinkrak the Great and his "royal" court. Explore the fighter cards below. 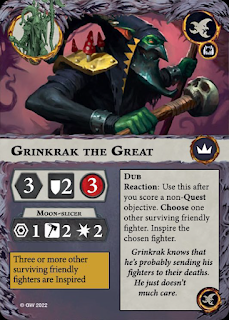 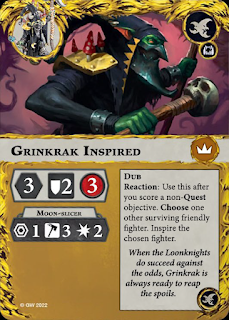 Grinkrak the Great has one of the best defenses in the game at 2 block. His attack is a respectable 2 Smash for 2 Damage that jumps to 3 Smash when he inspires (whenever three or more friendly fighters are Inspired).

He has the Dub reaction, which lets him inspire another surviving friendly fighter after you score a non-Quest objective. Currently, the rulebook states you cannot use reactions during the end phase, so this ability can only be used to Inspire other fighters after Surge objectives are scored.

Grinkrak's Looncourt introduces a new Objective concept called Quests. These Objectives can be placed under fighters to be scored when their conditions are met (and used to directly inspire the other fighters in the warband). These cards could allow you to have more than 3 objectives in play at a time, since you draw up to 3 Objective cards in hand during the end phase and draw a new Objective anytime you score a Surge Objective! 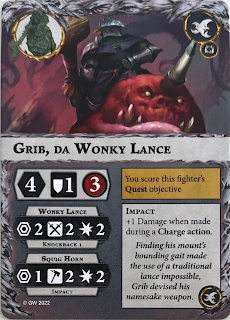 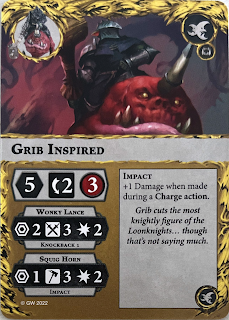 Grib, da Wonky Lance is one of 3 3-Wound members of the Looncourt and is likely to be your main damage dealer. The Squig Horn doing 3 damage on a Charge is a big deal! Like the rest of the Looncourt, he inspires when you score a his Quest objective. When inspired, he is faster, has better defense, and is more accurate! 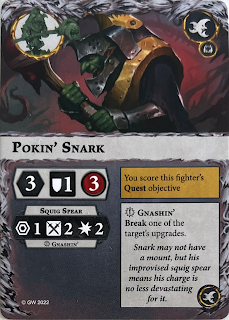 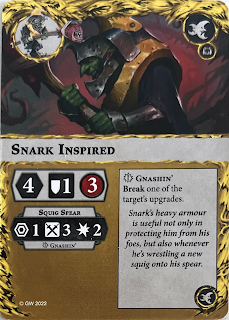 Pokin' Snark is the next 3-wound Goblin and one of two Goblins with weaponized Squigs. His Squig Spear has Crit Gnashin' which lets you break one of the target's upgrades on a Critical hit! Once inspired, he goes to a respectable 4 move and gets more accurate. 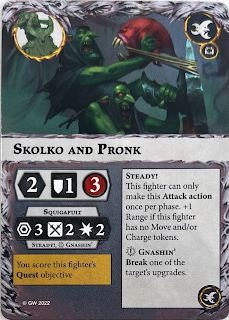 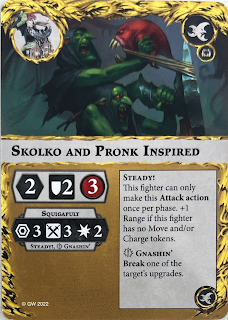 Skolko and Pronk are the last fighter(s) to have 3 Wounds, though I guess that's shared between the two of them. They wield a Squigapult (the other weaponized Squig), a range 3 or 4 (thanks to the Steady! ability), 2 Damage attack that has Crit Gnashin' as well! Once inspired, they go to 2 Block defense and their Squigapult gets more accurate. 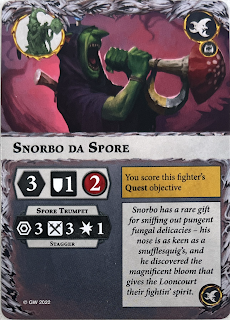 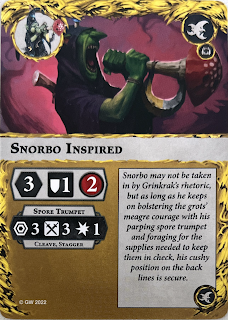 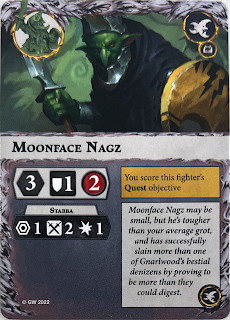 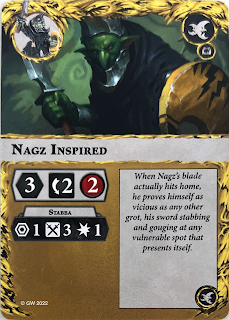 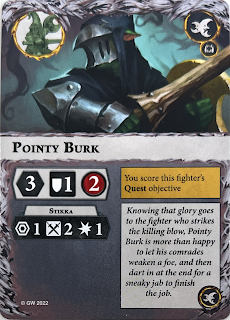 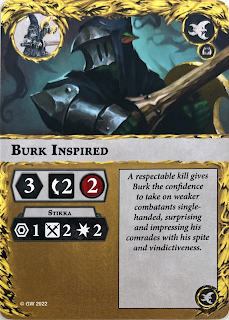 The last 3 fighters have 2 wounds each and fairly similar profiles. Snorbo's Spore Trumpet is a ranged attack that can hand out Stagger, while Nagz and Burk fight in close quarters. When inspired, Nagz gets more accurate, while Burk does more damage. 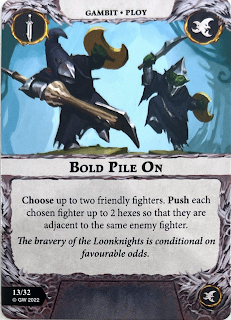 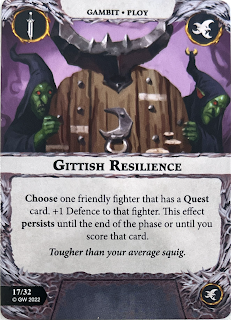 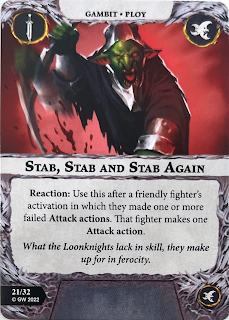 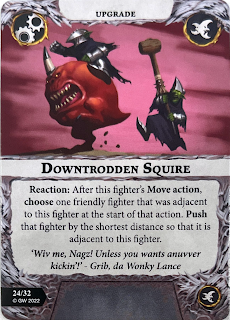 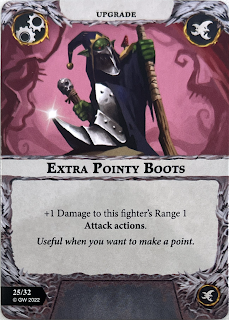 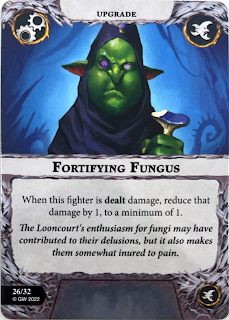 No lethal hexes. Wide deployment options, because you probably want 3 Objective tokens when you can get them. Halls of Sublimation, Mirror Well, Stricken Swamp

Aggro, with some light hold Objectives. They're really reliant on their Gambits and Upgrades and you'll likely have to choose between scoring the Quests and Inspiring more fighters.

Farm the Glory. Play against the quests.

Silver. We think they have a high skill ceiling but they'll bleed glory.

We're looking for easy to score Surges. We like Fearsome Fortress (two easier Surges and playing off Stagger to improve accuracy) and we like Illusory Might (good upgrades, but the surges are a lot weaker).
Check out our Nemesis Deck Library for Jason's Looncourt + Fearsome Fortress Deck. 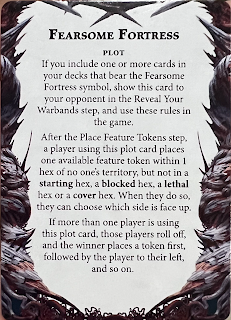 This plot card lets you place an additional feature token, your fortress we suppose. Feature tokens within one hex of no one's territory will help you score many of the Objectives in the deck and are crucial for many of the Gambits and Upgrades. 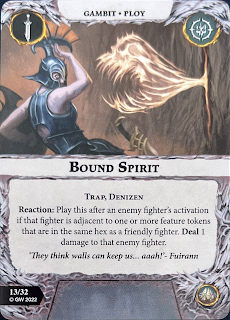 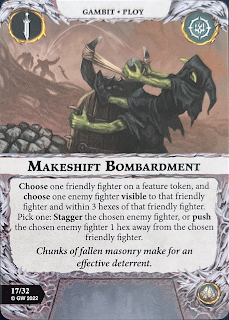 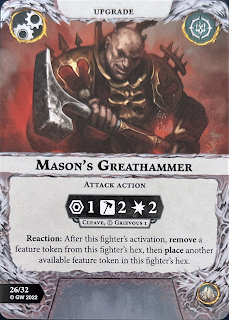 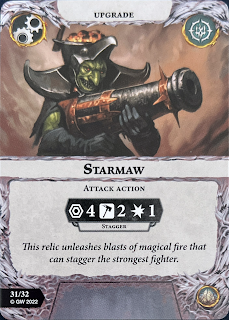 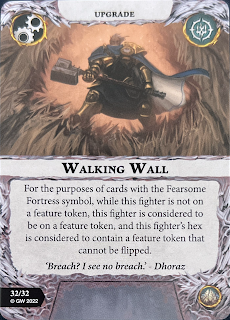 Whichever boards give you the most options for placing tokens within 1 hex of no one's territory.

Hold feature tokens and demolish anyone who comes into your territory.

Either get on feature tokens within 1 hex of no one's territory or attack with Range 2+ fighters.


What Warband Should I Play?

We think the elite, high wound Warbands that already want to be on objectives or feature tokens work best here. Steelheart's Champions, The Wurmspat, Morgok's Krushas

Silver. The deck is fairly focused, but is lacking in Damage (through Gambits or Upgrades) to make it viable for real successful play.

When you are able to mix other Warband's cards into the mix, any Warband that wants to hold one or two objective tokens and stay in or near their own territory will be able to use the Fearsome Fortress cards effectively. Warbands like the Dread Pageant, Gorechosen of Dromm, and even Sons of Velmorn come to mind.
Check out our Nemesis Deck Library for our Nemesis Decks that use Fearsome Fortress: Storm of Celestus, The Wurmspat, Sons of Velmorn, The Dread Pageant, The Exiled Dead and Grinkrak's Looncourt.